Some a Chapter, Some a Page

On the first day of third grade, Melissa approached me and asked me to play.
My family had moved to a new part of town, new house, new school. Believe it or not, I was a pretty shy kid, but once I knew someone and gained comfort, I would come out of my shell and talk…A LOT (not too different from now).  Initially, very shy.  We played at recess and ate lunch together, and a friendship began.

For the next three years we were practically inseparable.  We rode bikes (without helmets *gasp*) all around our small town. We slept over at each other’s houses. We played with dolls and played outside. We started “clubs” that usually only lasted a day or so.  This was back in the day with only one house phone, no video games.  We had to use our imagination.  We began puberty together (isn’t that a great time in life?!)  We challenged each other, competitively, to exceed in school. Participated in Honors classes together.  Both were offered to skip a grade. Spooked each other playing the Ouija board. Irritated our older siblings with our mere presence.  Had slumber parties.  Figured out how to use a brush and curling iron. She gave me my first Cabbage Patch Doll for Christmas (which was a HUGE deal!).  Our other friends, twins Cassandra and Catrina, were essential parts of our friendship circle, but Melissa and I were truly best friends.

At the end of fifth grade, the four of us all went our separate ways due to our family circumstances.  Melissa moved to Arizona to live with her father. The twins moved to Mansfield.  My family and I moved to Crowley.  Bigger house, better schools.  All different directions, all new adventures, but the bonds were formed.

The summer after Melissa moved, at age 12, I flew on an airplane for the first time to visit her in AZ for two weeks.  We paraded all over Tempe as we had done our little township outside of Fort Worth. Over the remaining course of our school years, we’d visit when she came back to TX to see her mother.  We wrote letters, and occasionally, we spoke on the phone.  You see, the efforts to stay in touch were much more difficult as there weren’t cell phones, social media, or email, and calls were long-distance.

During college, we visited at least once, I believe for my first wedding.  We had a great reunion, all four of us, in 2000 shortly after I married Jerry. It never ceases to amaze me how that childhood bond and friendship leads us to always picking right back up where we left off, as if we never missed a beat.   Social media has since helped keep the bond alive and the connection strong.  We can now more easily stay in touch and follow each other’s lives.

So, you had to know I’d throw Bon Jovi in here.  Side note, whenever Bon Jovi announces a tour, of course I plan for all the TX shows, but I also like to pick at least one other city to visit and see the show. This year, Bon Jovi played two shows in North Carolina, where my friend Melissa had recently moved.  It was the perfect storm.  Long story short, I reached out to her, we planned a girls’ weekend to visit and see Bon Jovi. She hasn’t seen a concert since college, and we hadn’t seen each other in a while, so she was very excited about all of it!

I snagged us some fan club presale tickets in row 6, thinking this would be pretty amazing for her.  Since I’m weird and obsessively curious, after I purchased those tickets, I just glanced to see if any better tickets were available.  I thought my vision had failed me when two front row seats for face value popped up.  Needless to say, I whipped those into my cart so fast!  I rolled the dice and bought them!  My only Front Row seat on this tour!  (The other set sold, so I wasn’t out that $).

The minute I secured the best tickets and my flight, Melissa’s super cool husband reserved us a hotel room in Charlotte near the venue so we could spend time together in her home with her family, but we could also spend time alone in Charlotte.

I arrived in NC around lunch on Friday.  Instantly, we reconnected.  It was like we’d just seen each other last week.  We picked right back up where we left off.  SO much to talk about, SO much to share.  Rarely was there a dull or silent moment.  The semi-amazing part is that despite spending so much of our lives in different states, having different life experiences, different parents, different schools, etc., we turned out to be so similar.

We are both nurses with the same graduate degree.  Spelling and grammar Nazis. We talked about husbands, kids, works, parents, siblings, old boyfriends, friends, parenting, life, religion.  You name it, we probably talked about it.  Almost everything was the same and we had the same or similar philosophies.  I guess we were onto something at age 8.

Once we arrived in Charlotte for the concert, we checked into the hotel where we ran into the opening band on the elevator.  (They waved at us from the stage!) We explored the Uptown area a bit before we returned to get ready for the show. I fixed my typical “rock star” hair and put on my new bright sequin shirt. (I got quite a few comments on that shirt!)  Melissa cleaned up like a super model, so beautiful. 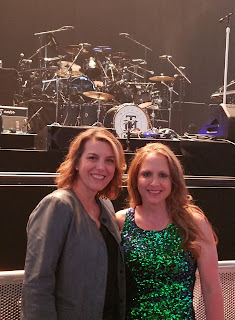 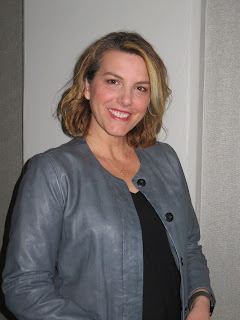 She couldn’t believe our seats!  When the lights went down, the excitement soared!  She rocked out and jammed like a real well-trained groupie.  Never having seen Bon Jovi live before, she didn’t know what a treat she was in for!  I think she was dazzled not only by the quality of a Bon Jovi show but also amazed at the front row experience.  It’s something that is hardly matched, and I may have created a monster!  Facial expressions. Eye Contact.  Communication with the artists. Watching the on-stage communication between the musicians and the nuances of each person. The sweat…..those things you cannot see from far away.

Towards the end of the show, JBJ jumped off the stage, during Bad Medicine, and went to his left to shake hands with fans.  This isn’t a typical move from him.  Besides, singing immersed in the crowd to sing two ballads mid-show, he doesn’t often leave the stage, although he will lean to touch hands.  We did not know if he would come our way or not.  When he started walking our way, she had her camera ready.  I had my hands ready to shake his.  Instead, he locked eyes with me, and holding his mic in one hand, leaned in and gave me a hug and KISS!  ( Look at 1:40 on. It really happened!)Afterwards, he continued down the way to shake more hands.  We almost died!  After 30+ years of fandom, a dream come true!


Afterwards, we visited a local hotel bar just to wind down and recap and we encountered some band members there.  When Keyboardist David Bryan saw me, I said hello, and he commented on my shirt “being awesome” and said he saw it from his side of the stage (Opposite us!).  I think it’s my new lucky shirt.

We settled into our room after a long eventful night.  The next day (ok really, it was the same day since we retired in the wee hours of the morning), we explored more of Charlotte on a comedy bus tour, then returned to her home. We spent the remainder of my time in NC enjoying her family.  Her husband is so kind, clever, and funny.  Her adorable boys are smart, charming, and well-behaved.  They were all truly a treasure to be around.  I didn’t want our time to end, but I couldn’t wait to share my adventures with my own husband and sons.  My entire weekend was amazing.

I’m writing as I fly home.  I can’t wait to see her again!  North Carolina is beautiful this time of year, and it’s a great place with plenty of things to do within driving distance.  I know that now not only do I have a great girls’ weekend destination, but I have a guaranteed Bon Jovi buddy and tour stop in the future!

I have now been to over 30 concerts before this trip, and Charlotte is my new Number ONE!  Great seats. Great set list. JBJ sang “Living with the Ghost” (Living With the Ghost). 35 years of friendship and 30 years of fandom collided perfectly. Got the set list, and our photo was on twitter at the end of the show (the girl said she chose us because of my shirt!).  JBJ had great energy.  Experienced it all with my first BFF…and oh yeah, THAT KISS! 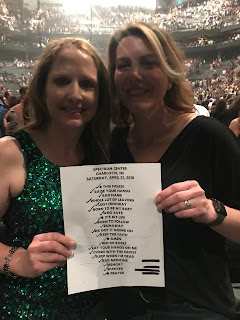 In my life, I’ve always had good luck with “Melissas”  She was the first.  Some people enter your lives and they are there for a page, a chapter, or the whole story.  Missing only the first few chapters, she’s a whole book person.

Once upon a time on the first day in third grade…..   the rest is history!